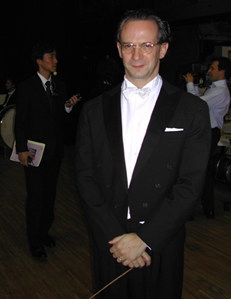 AN ORCHESTRA ON TOUR IN JAPAN

The Vienna Symphonic Orchestra went on tour with its almost 100 musicians and all their instruments. A logistic challenge in terms of organizing minutely the whole two-weeks tour from making hotel bookings to arranging for the careful transport of all the precious instruments…

We had the exclusive right to follow the whole orchestra on its last tour to Japan starting filming already at the rehearsals and preparations in Vienna.The protagonists of the film are the famous Italian conductor Fabio Luisi, the woman in charge of the whole logistic organisation of the tour and some further orchestra musicians.

A look behind the scenes of this huge undertaking of one of the world’s most famous orchestras going on a tour with nine concerts played in six cities in Japan. The musical program ranges from Mozart to Brahms and Mahler.